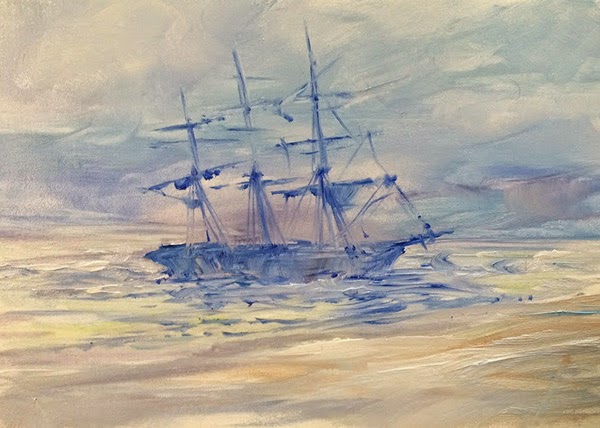 This is a fresh 5 X 7 oil of what the sailing ship Henry B. Hyde might have looked like after beaching here in Virginia Beach. Imagine what that must have been like!  What weather would confuse a crew to think they were further out to sea. Of course, now the beach is well illuminated here, but a hundred years ago that wasn't the case. The saying was, concerning the coastal lighthouses like the Cape Hatteras light, that if you could see the light --you were too close to shore. Recently one of the Volvo Ocean Race yachts hit a reef off of the eastern coast of Africa. They were running fast at night, with GPS, radar, and all sorts of computer aids and, ..ouch! So what did it feel like and how sickening for the captain and crew of the Henry B. Hyde to know that, OOPS! --this ship was doomed and they might not get away safely?

I've been examining several photos of the wreck and it appears part of the upper foremast fell over the starboard bow. I'm trying to establish what happened. At any rate, though grounded, depending on the surf and storm, this fine cargo ship might have been beat up and turned around before she was scavenged and abandoned. Part of her is probably still there buried in the sand. A future hurricane may temporarily reveal the carcass and timbers some day.

Thanks for dropping by here and taking a look at my work! I'm painting full time and glad for it. I hope you will check back often.

I would be happy to hear from you. Write or call!

Art here is available through the artist and other work will be available at various galleries.

More information is at:
JackAnglin.com